Yesterday porters from a local auction house turned up to collect our huge old Victorian pitch pine bookcase. I told that I hoped that they had eaten spinach for breakfast, because it weighs an absolute ton. I am now sorting through all the books which it once held - some of them, I must confess, haven't been opened in perhaps 10 years. So many of these are being packed into boxes for auction/charity shop/car boot sale, and a much smaller pile to keep. Now I will be able to carry on with the decorating in the room. The deep yellow is the new colour. My husband has to make another length of the dentilled cornice to replace one which was damaged when one wall was replastered, and repair a bit of broken plaster at the angle of the wall into the archway which now blocks what was once a doorway in ancient times. I shan't nag him though, because he is currently mending my lovely sewing box, which has languished in the bits and bobs in this room for many a long year. 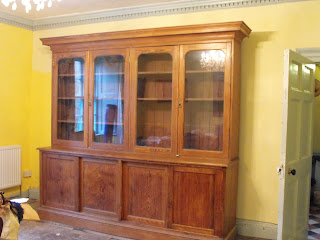 It was SO warm out today. I managed to shed a layer even indoors! I couldn't resist the temptation of work in the garden, so after I had scrubbed the hall floor, and sorted out two boxes of books to go into auction, that is what I did. What started off as a little light weeding in the corner between the dustbin and the wildlife pond, ended up as a tackle the ivy and brambles and the snowberries which were overhanging the pond. I quickly accumulated a barrowful of rubbish, especially after a very muddy trawl around the edge of the rockery there, and the old cart shed stable blocks which form the standing for the dustbin. The smaller birds seemed to ignore me, but the blackbirds kept away whilst I was out there. They are mostly back along the hedgerows now anyway, no longer quite so desperate for food although I am still putting plenty out for them all.

I had to rehome a lot of my old sewing stuff from the bottom of the bookcase, and came across this hand-quilted cushion top which I made when the children were very small. I will put a fresh border and back on it and then it can be used again. 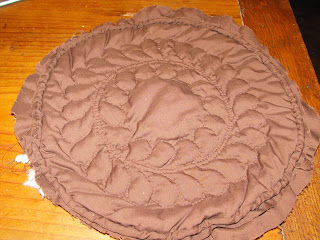 This pretty x-stitch design was once the cover for a round robin letter magazine I belonged to and finally edited in the days before the internet, when I had penpals instead of forum and blog friends. I'm going to look out a little frame for it and hang it downstairs now. I'd forgotten all about it. 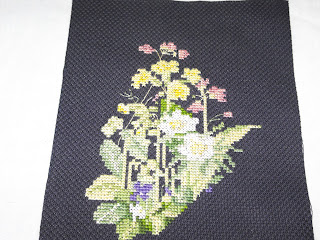 Finally, the finished scissor keep. The sewing of the edges to include the cord for the scissors and a gap for the tassel was fiddly, but as it's just for me to use, I shall forgive its imperfections. 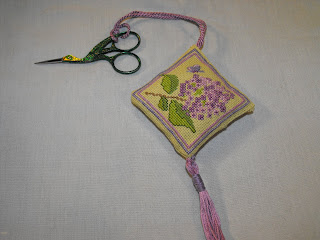